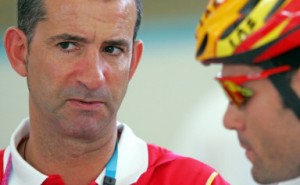 I am writing to you about an article that appeared in the newspaper “El País” during the Athens Olympics,

not only to remember what was done, but also the time that has passed and wasted, has not been done

nothing in Spain, neither innovation nor work, nor coordination, in general poor choice of technicians and these

The centers / velodromes work well, managing the budget well and with a good program.

It could be back on top again in future games, but it is late two cycles.

I leave you part of the interview and at the end the link.

“Persecution is strength, cadence and technique”, proudly proclaims Jaume Mas, the coach who has taken the Spanish track out of the moor – an oasis: the

fierce individuality of Joan Llaneras, Olympic champion, multi-time world champion. “If we add teamwork, dedication, enthusiasm and camaraderie to that,

we have the medal.” To Jaume Mas, born in the Balearic Islands, the land of velodromes, son of pistard, himself in the days when Madrid was still playing the

Six Days, a technician who learned all the secrets, that he sucked, from his father, Gabriel, also a long-time coach, discoverer of talents, is ashamed to appear

before the press, to be photographed with two bronze medals, one in each hand, to remember the long road that Spain took: last in the Sydney Games in

pursuit by teams. Thirteen seconds more than in Athens in teams, 17 seconds in individual. And it is a four-kilometer competition, where up to the

thousandths are counted. He apologizes, says that the politicians are congratulating him and he can’t leave them, he enjoys, he gets excited, seeing his quartet

on the podium, and finally he appears.

“Although they have run four, the team is five, and that is difficult to achieve, that the five work the same knowing that one will be left out,” he says at the

outset, a statement of principles. “In fact, the Higher Sports Council has just announced to me that next year all five, including Guillermo Ferrer, will have a

scholarship, not just the four that have run.” Mas came to the technical direction of the track three years ago, ending the previously existing division between

the background specialties -pursuit and scoring, mainly- and the speed specialties -sprint and keirin. His first mission was to rearm the pursuit team,

recovering for the national team runners whom he had formed in Catalonia, such as Sergi Escobar or Carles Torrent. The latter, who had turned on the road –

he went on to win the Tour of Rioja with Paternina – rescued him by selling illusion and confidence, the elements that he lacked in his previous time in the

national team. “One of the greatest injustices that was committed in Sydney,” says Mas, “was to do without Escobar and Torrent, but I have not made the team 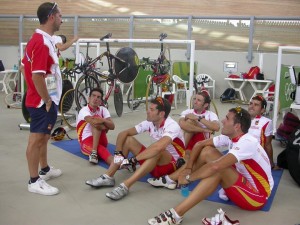 But quickly, skillfully, Mas, a man of numbers, developments and timers, leads the conversation, the theme, to his field. “Let the Australians, who have
already begun to count on us, as British and Germans, who previously looked down on us and now know that at any moment we can defeat them, because
Spain already has the potential to be among the first eight in the entire track program, “he says,” but the secret we train best, together with the strength work
carried out by Eloy Izquierdo and Jordi Portas, is that of cadence. ” And to show it he extends a multiplication table, another to divide and a rule to solve
equations imaginary before his eyes. “For example,” he explains, “I knew that if we did each lap in 15 seconds, that is, at 60 per hour, Germany could not beat
us. And for that, with the development we were carrying, a 50/13 all except Escobar, the strongest, which has moved 51/13, we needed a cadence of 126
pedaling per minute. Now, this is a very high cadence, that’s why we have had to work it a lot. And now I will tell you how, my secret trick

Sssh …, that nobody finds out, that none of Armstrong’s rivals, the cyclists who grieve and hallucinate when the American makes the grinder in the toughest

çports on the Tour and who do not know what to do to reach their infernal cadences, will learn it . “The trick is very simple: when we train we do it with a

smaller development, easier to move, at the cadence that we will then use on the track with more development,” he says. “Legs grow in agility, and strength

work in the gym will do the rest so they can move later like this, at 60 an hour so quietly.” 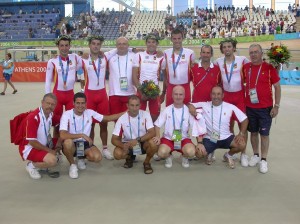 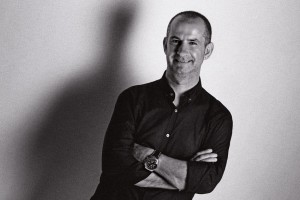